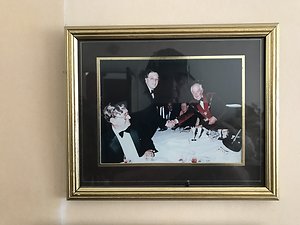 This is a photograph of a framed picture of me back in the early 90s in central London, accepting a financially supported award on behalf of the small therapeutic community (see below).

At bottom of this page:
Articles, lectures, talks & radio chats.

*In terms of psychology – City University is ranked the second highest university for psychology in London.

Counselling at various levels,
integrative psychotherapy ~ drawing on different theories
and models as appropriate to the particular needs of the client.

The counselling can be brief, short term or longer.

Contemporary Relational Analysis
The training was with:

The Bowlby Centre is based in London E1, close to the City centre.

This four year professional training program facilitates a sensitive and in-depth interpersonal approach to psychotherapy, and also regards our past attachments and current relationships in life, and can be seen as a modern and contemporary supportive form of Relational Psychoanalyis.

The focus is on Attachment Theory and is inclusive of the relevant aspects of the traditional approaches in psychodynamic psychotherapy, and might be described as a modern relational approach to psychodynamic psychotherapy. It is based on extensive and comprehensive real life studies, alongside carefully conducted empirical research. Attachment Theory has now been taken up around the World, and within the spirit of an ongoing interactive cooperative development of its ideas. The Bowlby Centre is the main training organisation in London for Attachment-based Psychoanalytic Psychotherapy. This centre provides a comprehensive four-year in-depth training.

It is registered with the United Kingdom Council for Psychotherapy as a training organisation, and is listed in the Psychoanalytic Section.

Dr John Bowlby and Dr Mary Ainsworth were the founders of Attachment Theory. At the outset of this research Dr John Bowlby was already both a psychiatrist and psychoanalyst. After the war he was made Deputy Director of the Tavistock Clinic in London, and from 1950, Mental Health Consultant to the World Health Organisation. Mary Ainsworth was a brilliant American developmental psychologist who took up as John Bowlby's research assistant in London. They developed the main understandings and approaches of Attachment Theory in the 1960s & 1970s. This later led to the development of a training centre in Attachment-based Psychoanalytic Psychotherapy (1990). It is now referred to as

(http://www.gu.se/english/research/new_doctors_2007/Mary_Main/)
It has now come about that Attachment Theory ~ facilitated from its empirical and in-the-field practical approaches for its findings and ideas ~ has now been adopted as a vehicle for general research purposes. It has proved over time to have been able to provide a link between the previously separated modalities of psychoanalysis, developmental psychology, neurobiology and the behavioural sciences.

This was with the School of Infant Mental Health which is accredited with the UKCP for its postgraduate diploma programmes and is in collaboration with the University of East London (UEL) for its professional doctorate.

My training here comprised post-graduate observation & studies from the perinatal period through to early infant development. Alongside this, I studied the latest new pioneering approaches and theories of the bio-neurological, cognitive, emotional and developmental issues in regards to the mother-infant attachment.

It consisted of mother-infant observations over two years. Also two years of theoretical studies of infants as regards to developmental psychology, developments in attachment styles and a major focus on the contemporary understandings of the psychoanalytic aspects of parent infant dynamics. The studies also regarded ~ in depth ~ the bio-neurological developments of the infant ~ about which I am currently regularly updated to this day.

These pioneering contemporary studies had brought together aspects for the understandings developed in 'infant psychotherapy'. This was a focus on the developmental family dynamics of the mother, father and infant ~ as seen in relationship together. In this approach it was stated that, in some cases, a few sessions had been sufficient to turn around developmental issues in the infant ~ as regards to a number of different early infant developmental problems. These issues can also at times be related to the deeper or underlying levels that might sometimes be considered relevant to a contemporary in-depth therapy ~ if a real difference in regards to deep underlying levels is to be made.

Post Graduate studies in Therapeutic Communities
This was with the Philadelphia Association London (1984/5). This comprised fifteen months of studies (four terms) in the understandings of social phenomenological and existential meaning in community relationships, plus one year of attendance in experiential group work.

Co-founder of a small residential Therapeutic Community
This was a long stay small therapeutic community founded in 1986 and was based in South West London. It was closed in 2010 ~ due to re-structuring ~ after nearly 25 years of service provision. It was run on basic principles of community and democratisation, alongside a focus on some group dynamic processes, and existential perspectives….

People lived as full-time residents in this community from six months to two years, in order to work in depth on their problems ~ both individually and as a community.

A few hundred persons had passed through this small community over the years.

I was the project coordinator for the
'Asclepion Therapeutic Community' and responsible for all aspects of its organisation and functioning from 1997 to 2001.

Past organisational member of ATC (Association of Therapeutic Communities, UK)

©2021 John Jolliffe is powered by WebHealer
Cookies are set by this site. To decline them or find out more visit our cookie page